The Real Reason Why The UN Is Anti Israel 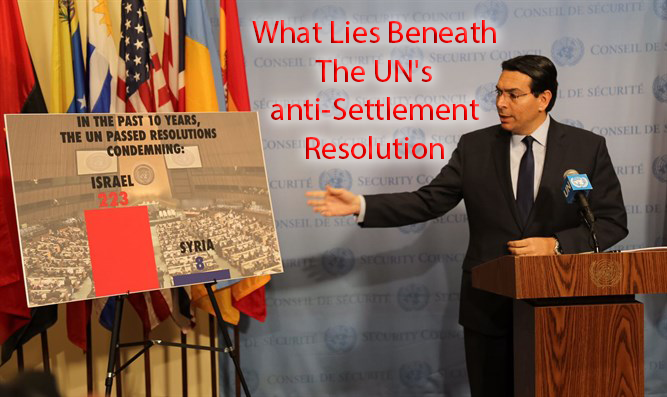 The recent UN anti-settlement resolution symbolizes the UN’s anti-Israel approach over the years. But is this act against Israel just another example of anti-Semitism clothed in anti- Zionism? Why DO all these countries vote against the Jewish nation over and over again? Are we that bad? There might be a deeper core reason for this irrational hatred.

While Israel has acted on various occasions to end the “occupations” and “settlements” (the Oslo Accords of 1993, Camp David of 2000, leaving Gaza at 2008), many of the countries that have just voted against Israel at the UN resolution have failed to act according to this standard on their own land:
“Russia, which has occupied Kronenburg since 1945, after capturing that ancient German city, ethnically cleansing its population and bringing in hundreds of thousands of Russian settlers; China, which has occupied Tibet and brought in thousands of Chinese settlers; France who occupied and settled Algeria for many years; Great Britain, which has occupied and colonized a significant portion of the globe; and assorted other countries, several of which have horrendous human rights records” (Dershowitz, Jpost 12/24).
The UN’s irrational attitude towards Israel was recently voiced by UN Secretary-General Ban Ki-moon stating that there have been a “disproportionate number of resolutions, reports and committees against Israel.”
While the UN has passed 223 resolutions condemning Israel, it has only passed 8 resolutions condemning the Syria regime, which has massacred hundreds of thousands of innocent people with the numbers still on the rise.

What lies at the root of this irrational hatred?

Is it the sincere desire to protect the rights of a certain people? No, it can’t be otherwise the UN would be doing something to try stop the atrocities taking place in Syria.
Is it their aspiration to stop violence against civilians? This can’t be farther from the truth, since “No other army in the world has ever done more than Israel is doing now to save the lives of innocent civilians in a combat zone” (Col. Richard Kemp, former commander of all British forces in Afghanistan). Unfortunately, this cannot be said about the Hamas terrorist group, the governing authority of the Gaza Strip.
Is this action against Israel the UN’s cry for peace in the region? If this is the case, the UN should WAKE UP as their cry is falling on deaf ears. Take a look at the Hamas covenant: “There is no solution for the Palestinian question except through Jihad. Initiatives, proposals and international conferences are all a waste of time and vain endeavors” , and “Palestine – from the [Jordan] River to the [Mediterranean] Sea, from its north to its south – is our land, our right, and our homeland. There will be no relinquishing or forsaking even an inch or small part of it”.
So ultimately, what lies at the core of these “anti-Israel” acts?

To answer that, let’s take a close look at some of the reasons for hatred of the Jews throughout history:
1st century – Jews blamed for killing Jesus.
5th-15th century – Jews seen as Greedy Usurers causing “Black Death” epidemics, and drinking children’s blood.
1881 – Jews blamed for the assassination of Tsar Alexander II.
1933-1945 – Jews were claimed to be inferior (Nazi ideology).
20th-21st century – One billion people with anti-Semitic views with the idea that “Jews run the world” (ADL Global 100: An Index of Anti-Semitism).
It’s clear that for centuries the root of anti-Semitism has been irrational, and the UN resolution against Israel simply continues this trend.

Professor Michael Curtis, former president of American Professors for Peace in the Middle East and editor of the Middle East Review, offers this poignant quote about the irrationality of anti-Semitism:
“The uniqueness of anti-Semitism lies in the fact that no other people in the world have ever been charged simultaneously with alienation from society and with cosmopolitanism, with being capitalistic exploiters and also revolutionary communist advocators. The Jews were accused of having an imperious mentality, at the same time they’re a people of the book. They’re accused of being militant aggressors, at the same time as being cowardly pacifists. With being a Chosen people, and also having an inferior human nature. With both arrogance and timidity. With both extreme individualism and community adherence. With being guilty of the crucifixion of Jesus and at the same time held to account for the invention of Christianity.”
So yes, with no logical explanation to WHY there are so many that hate the Jews, it does seem irrational; however, there are many Jewish scholars, rabbis and thinkers that point to a possible reason for this. Here are just a few (and you can see more here: https://goo.gl/T74tvT ):
The building of the world, which is presently shattered, due to the fierce storms of the blood-filled sword, is demanding the restoration of the Jewish [Israeli] nation. The building of the nation and the revealing of its spirit is one and the same and is all connected with the building of the world, which has crumbled, and is eagerly awaiting the power of unity. All this is found in the soul of the assembly of the people, the Jewish People.
Rav Kook, Orot (Illuminations)

The Jewish people should be a role model to the world.
Baal HaSulam, The Writings of the Last Generation & the Nation, Part One

This approach was not reserved for rabbis only; Ben Gurion, primary founder of the State of Israel, said:
“Love your neighbor as yourself” (Leviticus, 19:18) is the utmost commandment of Judaism. With these three words, the eternal, human law of Judaism has been formed, and the entire corpus of ethics literature could not say more. The State of Israel will be worthy of its name only if its social, economic, political, and judicial structure will be based upon these three eternal words.
David Ben Gurion, “The Revolution of the Spirit,” A Vision and a Way, vol. 1

So will these anti-Semitic acts continue under an array of different irrational pretexts? They have for thousands of years. Maybe the Jewish people should try a different approach and start focusing on practicing the importance of unity and spreading it to the rest of the world.